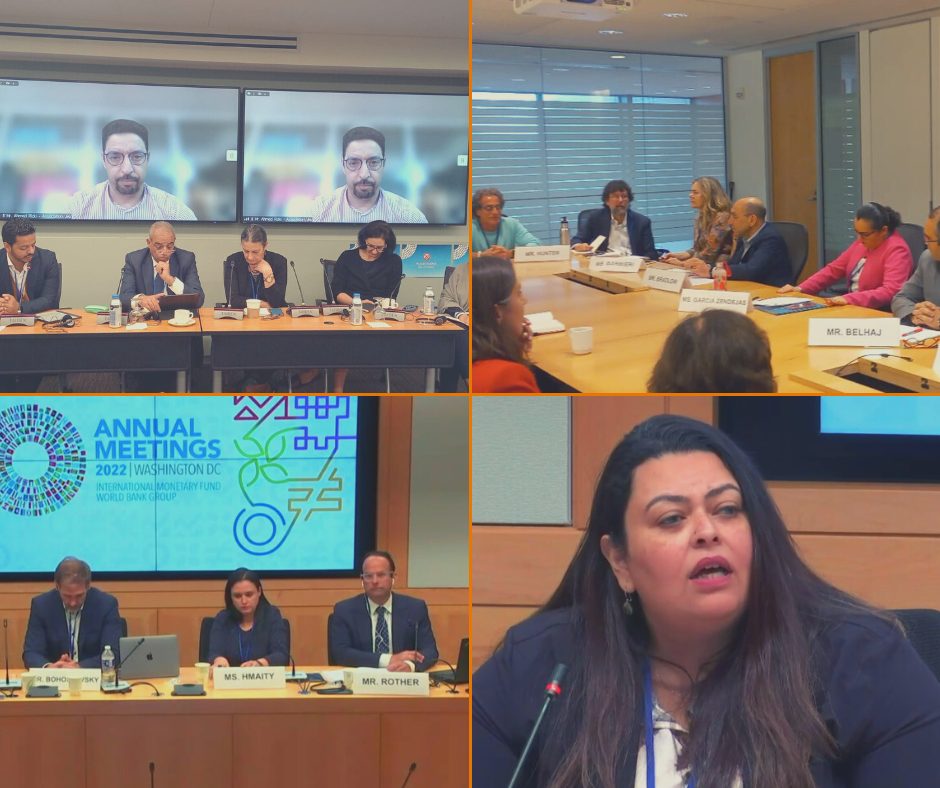 Despite the protests, the sessions, the debates, and all the pressure that civil society organizations exerted during the annual meetings to highlight the seriousness of the current economic situation and the outdated policies of the Monetary Fund and the World Bank, the Bretton Woods institutions have not taken any serious steps towards debt revision and lending policies.

The continued disregard of our urgent appeals for the serious impact of the climate crisis and the imposition of austerity policies, as well as the impact of the Ukrainian-Russian war on food security and the risk of bankruptcy, reflect the lack of interest in achieving equitable development on the part of these institutions and the Governments of the most powerful countries in the world.

Civil society organizations,including Arab Watch Coalition, from all over the world carried a number of demands during this in person annual meetings, where the main ones were to cancel debt and stop imposing austerity policies.

During the Global Week of Action for Justice and Debt Cancellation, which coincided with the annual meetings, the debt cancellation campaign considered in its statement that “The IMF and World Bank continue to largely operate by offering emergency loans instead of meaningful debt cancellation and long overdue reparations for decades of policies that left people poorer and replaced colonialism with economic imperialism.”

“The Global Report on Budget Cuts and Harmful Social Reforms in 2022-2025” released by End Austerity campaign ahead of the annual meetings, also warned that more than 85 percent of the world’s population (the majority of the developing world population) will be most affected by the application of austerity policies, as these countries will experience an economic shock that will have direct implications for human rights.

Several organizations have called for a Quota reform of the Monetary Fund, and for a new allocation of SDRs that would provide unconditionally financial support free from fees. But, for political reasons related to the Russian war it appears that the Fund will be delayed in approving this allocation.

The Managing Director of the IMF Kristalina Georgieva confirmedIn her first dialogue during the AM22 with civil society representatives on October 10th, that the deadline of the Quota review will be by the middle of December 2023. And not completing the review will damage the credibility of the Fund. However, she didn’t bring up the governance and democratic deficit at the Fund mentioned by Luiz Vieira, the Bretton Woods project’ coordinator.

In response to the food security crisis in the world and especially in the MENA region, Shereen Talaat, the co-executive director of Arab Watch Coalition, called Georgieva to take some urgent action such as the immediate elimination of the Surcharges policy.  To alleviate the debt burden, but the MD of the IMF gave a point in favor of the surcharges policy “ the policy has a reason for the middle income countries because it limits them to borrow excessively and pay faster their debt”.

The Fund seems to remain convinced of this unfair policy. It will be discussed again in December and it will require a new round of pressure until it is finally eliminated.

In return the IMF promoted the “Resilience and Sustainability Trust” (RST), which has been described by the Monetary Fund leadership as a pioneering innovation to support countries in crise, while an unjust conditionality loan through which the Fund attempts to influence the climate and health policies of borrowing States, as well as an additional tool for continued indebtedness.

In the same vein, the Managing Director of the International Monetary Fund, Kristalina Georgieva, said that: “For countries suffering from the food crisis, we have expeditiously opened up a window in emergency financing, the Food Shock Window, to provide rapid financing to urgent needs.” To confirm that this Institution can only devise more loans and therefore more dependence, but this time with a clear deviation from the Fund’s mandates.

What if civil society proposes other alternatives to address the threat of famine?

In the Food Security session organized by Arab Watch Coalition during the Civil Society Policy Forum, Bjorn Ruther, Bjoern Rother DivisionChief within the IMF’s Strategy, Policy and Review Department of the International Monetary Fund (IMF), considered that talking about food sovereignty in the global south is dangerous and should not be included in the recovery strategies. To be clear today, the IMF policies are in the interest of the world’s wealthiest and most influential countries.

The imminent war and nuclear conflict, the threat of famine, the inflation, and the rising of prices are representing today a “polycrisis” which requires the development of different strategies from the economic reforms promoted by the Fund and the Bank that have contributed to the debt burden of low- and middle-income countries.

As for the deviations in the Fund’s policies that have began to deepen further with the complexity of the global economic situation, several civil society organizations and activists discussed at one of the most important side events during the annual meetings: “IMF policy and governance in the context of the ‘poly-crisis’: What next?” the establishment of independent accountability and oversight mechanisms for the governance of the Fund, where the need to address the unbalanced governance structure and to end the “gentlemen’s agreement” that guarantees the US-European leadership at the BWIs, was clear.

Climate and energy issues were presented strongly during these Annual Meetings. Many demonstrations and marches were organized around the world during the World Bank Action Day. October 14th was the World Day to call on the World Bank to stop immediately financing fossil fuel and gas projects and support the clean energy transition. Many activists and organizations consider that we need to put more pressure on the World Bank to stop financing lucrative projects in the extraction and the use of fossil fuels in many parts of the world and to highlight the threat of climate change and its widening inequality and equity.

In an article published in The Guardian, Georgieva: ”appealed last week for policymakers to act urgently and collectively to tackle a lengthening list of problems: inflation, hunger, debt and climate change among them. But the multilateral system is creaking and there were few signs last week that the appeal would be heeded”

Expecting that the war will continue and that the effects of climate change will increase over time, How can the Fund, the Bank and the G-20 countries act?

After the preliminary agreement on the granting of loans to a wide range of countries, including Egypt, Tunisia and Lebanon, it seems clear that the Bretton Woods institutions will provide to countries in crisis only debt, thereby serving certain interests far from the principles of sustainable development, equity, and participation. The economic collapse or total bankruptcy of a state means that many States have successively fallen apart, which will not exclude developed States — the current crisis is more comprehensive and complex than ever.

We continue to uphold the need for debt cancellation and urgent review of these institutions’ economic policies with economic justice in mind and the fight against inequality.