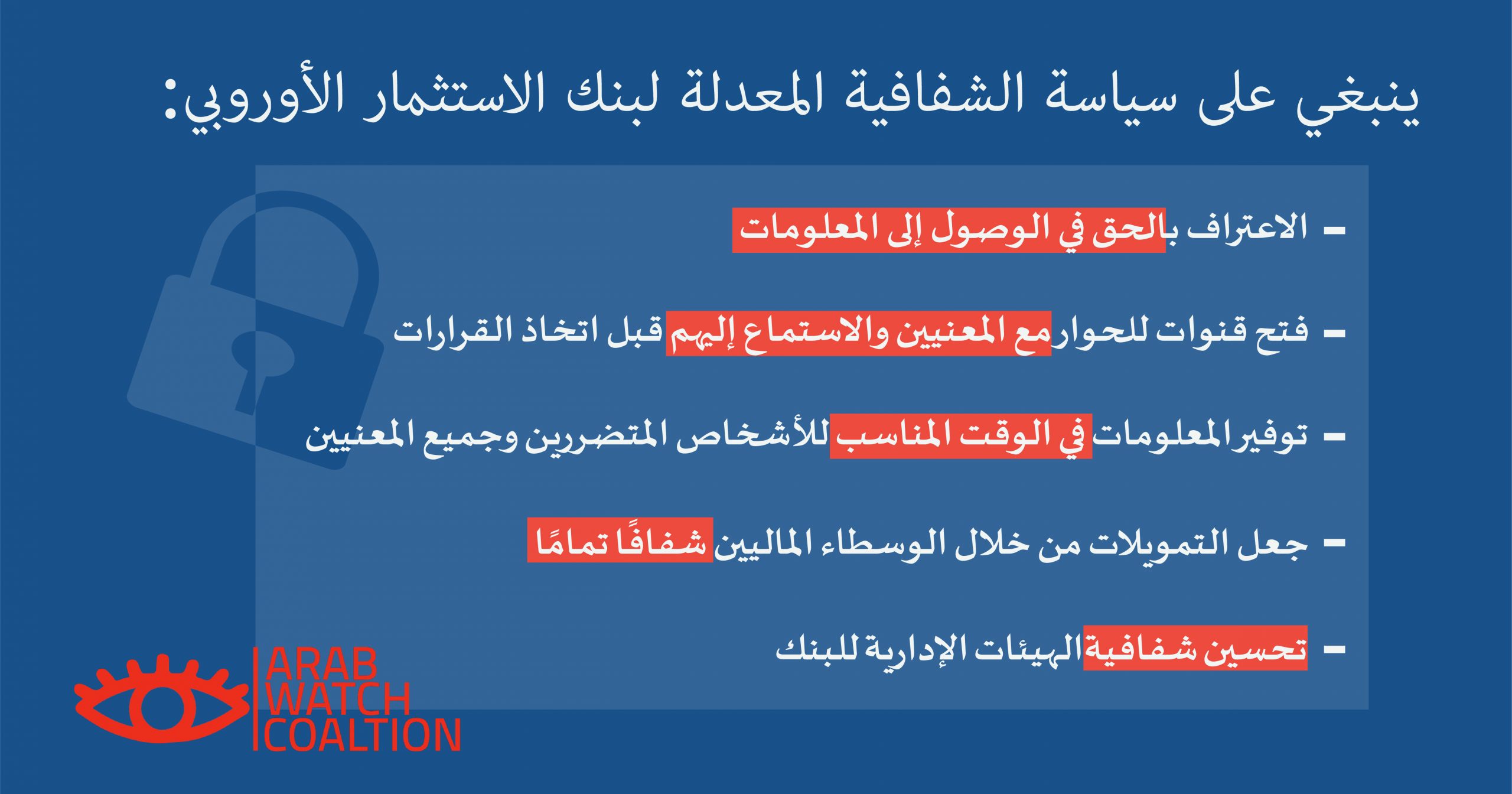 The European Investment Bank (EIB) is currently reviewing its Transparency Policy, it will specify what information the EIB will provide to the public, and determine the format and modality of information access. A joint CSOs analysis has been submitted today by 53 NGOs around the world, including the Arab Watch Coalition and its members around the MENA region, urging the EIB to part with secrecy in its operations.

As the EU lending arm, the EIB must ensure the right of all citizens to access information about its operations and to conduct its work as openly as possible with the participation of civil society and local communities.

THE PROPOSAL WOULD REDUCE THE CURRENT LEVEL OF TRANSPARENCY

Even if the EIB is promoting the current revision as enhancing transparency, the proposed revisions would actually lower the existing level of transparency. Most importantly:

No clear standard for actively dissemination of information: The draft TP proposes to revise the wording as to what documents are to be published in the EIB Register in respect of envisaged investments eliminating specific documents, which are essential and relevant (eg., Environmental and Social Impact Study/ Statement). Furthermore, details on the list of documents related to envisaged projects shall be published under a FAQ (frequently asked questions) page and not directly in the TP. This does not ensure an open and transparent access to EIB’s envisaged investment projects. A minimum list of mandatory documents which must be published in the EIB Register for all envisaged investment projects should be expressly provided in the TP (see annex, section 3 & 4).

Wider exceptions for not providing access to information/documents: Furthermore, should the proposal of the draft TP be adopted under the current version, the EIB would be able to withhold more documents from disclosure. For instance, the draft TP seeks to enlarge in a non-exhaustive manner what information/documents are protected under commercial interest. This exception must be strictly applied, only in cases where there it can be demonstrated that an actual and specific risk of undermining the commercial interest exists in a foreseeable, not only hypothetical, way. The EIB does not have unrestricted discretion in applying the exceptions for withholding information (see annex, section 2).

Less obligations on project promoters. The draft TP would remove an obligation on promoters to make Environmental Impact Assessment (EIA) and related documents publicly available. Given the importance of providing affected people with information on EIB operations, this would be a significant setback in terms of transparency (annex, section 6).

The current EIB standards are already low in comparison to the transparency standards that other IFIs are applying. According to the Aid Transparency Index, in 2020 EIB’s transparency practices scored only 58.9/100 points, by contrast to other IFIs, some of which reached even 98/100 points.

To raise its standard to those of the other IFIs, the EIB should for example start publishing information on the allocation list of final beneficiaries of intermediary finance operations (annex, section 7). Moreover, it should also change its practice and start publishing meeting agendas’ of the EIB governing bodies in a timely manner and not with only a couple of days in advance (annex, section 3). This is a common practice among other IFIs, which have a more open manner of performing their specific financial activities.

The EIB’s proposal also fails to give heed to repeated calls from the European Parliament to raise the bar on transparency. In its 2019 Annual Report, the European Parliament called on the EIB to review its transparency policy with a view to “the timely publication of more ample information on all its financing activities” (para. 79). As explained above, the current proposal would not ensure the timely publication of more ample information.

The same report urged the Bank to ensure the highest level of integrity of its financial intermediaries, and to guarantee that financial intermediary loans be subject to the same transparency requirements as other types of loans (para. 81). Despite this, the draft TP does not bring any improvements in relation to intermediary financed operations (annex, section 7). The draft TP equally fails to heed the Parliament’s call “for more transparency concerning the meetings of the Management Committee and their outcomes” (para. 77 – annex section 3).

The revision of the Transparency Policy is a great chance to improve participatory decision-making processes and governance, help fight corruption, identify potential social, economic and environmental benefits as well as avoid adverse impacts on communities and sensitive ecosystems. However, to realize this potential, the current draft needs to be substantially amended. If it is instead maintained, the EIB will further fall behind its peer institutions and fail to ensure much needed accountability within the EU.