Will the IFC’s accountability be summed up to washing its hands?

Back To Home
Egypt, International Finance Corporation May 11, 2020

Will the IFC’s accountability be summed up to washing its hands? 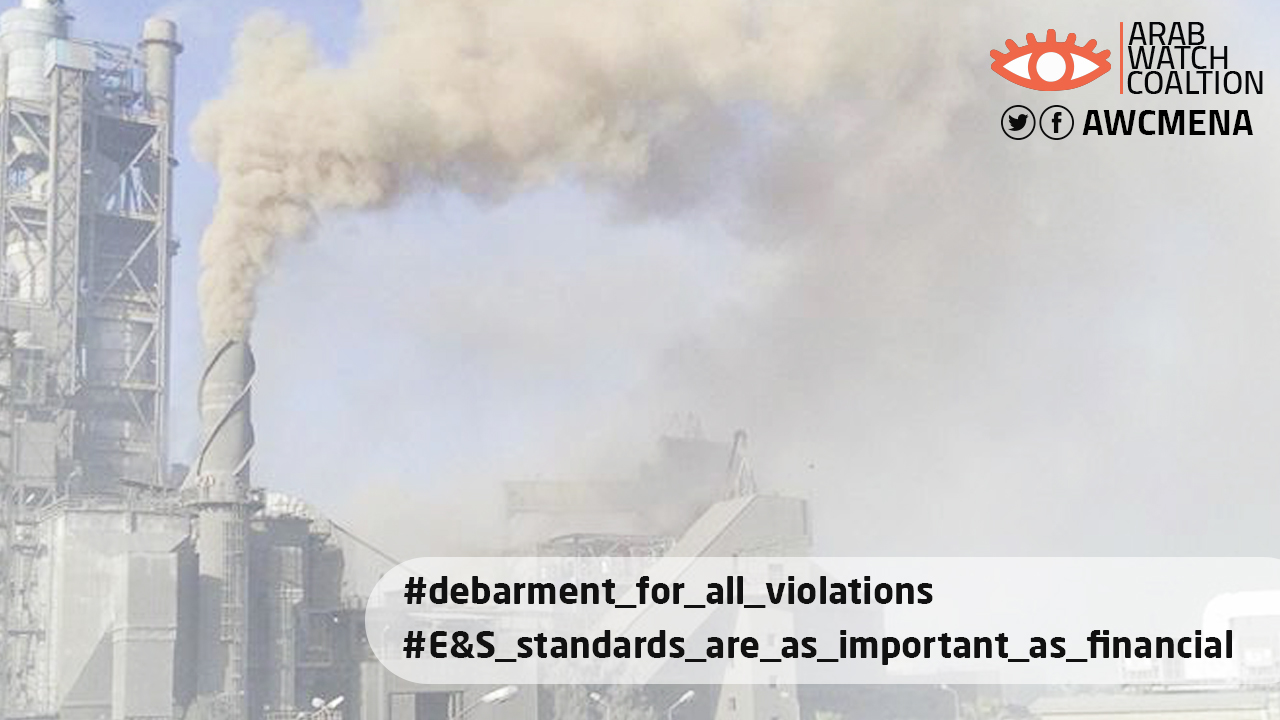 The International Finance Corporation (IFC), a member of the World Bank Group, champions the concept of impact investing in developing countries. After a long consultation process, the IFC launched the “Operating Principles for Impact Management” and invited other global investors to sign on to those principles. Those principles are set, theoretically, to ensure that investment in developing countries have positive development impacts. The IFC has also embarked on an intensive process to review its accountability system to ensure its efficiency and effectivity. However, the IFC holds the investors (the clients with whom it partners in developing countries) accountable only to financial standards. One case in Egypt tests the IFC’s commitment to its impact investment principles, and exposes how it holds its clients accountable.

Three complaints were submitted from Egypt to the IFC’s Compliance Advisor and Ombudsman (CAO) against Titan company. The first complaint was submitted in 2015.by the community living next to the plant in Alexandria as well as some workers at that plant. The complaint raised concerns related to pollution, community health and safety, labor issues, compliance with national legislation and IFC standards, environmental impact assessment, consultation and information disclosure. The second and third complaints were submitted in 2017 by workers at the Beni Suef plant. Those two complaints raised concerns related to labor issues, occupational health and safety, and compliance with national legislations and IFC standards.

The CAO compliance appraisal for the three complaints concluded that the complaints raised substantial issues related to the IFC’s appraisal and supervision of the environmental and social impacts of the projects. Based on those assessments, the CAO started an investigation process into the first complaint in 2017, and another one into the second and the third in 2018.

Given the CAO’s lack of resources, the process to investigate and draft the investigation reports took longer than usual. In early 2020 the CAO sent a draft of the investigation report into the first case to the IFC management for fact checking, and the IFC has started working on its response to the report. This response should also include an action plan to address the findings in the report. As per the CAO policy, the final investigation report and the IFC management’s response (including its action plan) will be submitted to the President of the World Bank Group, who will present those two documents to the WBG’ Board of Directors for inputs before approving their disclosure. It is expected that the two documents for this first case would be made public in the second half of-2020. The complainants are still hopeful that the action plan that will be developed to address the findings in the investigation report would bring them justice.

However, in November 2019, the IFC quietly divested from Titan. It did not announce anything about this divestment or about the reasons behind this decision. Divestment decisions, and the reasons behind those decisions, are protected by the IFC’s disclosure policy to protect the commercial interests of the clients. The news about the divestment was announced on November 21, 2019 by Titan Cement International via a statement on its website announcing that it had bought back IFC minority stake.

This divestment, which occurred after significant damages had already been done to communities and workers, raises many questions about IFC accountability. IFC management will still prepare an action plan to respond to the findings in the investigation report. It is still unclear how those actions will address the grievances of the complainants, since the IFC is no longer involved in the company and thus has no leverage to influence the situation or ensure that a remedy is provided. Furthermore, the IFC does not have a policy to compensate those who were negatively impacted by its investments after it divests. If the IFC decides instead to focus its action plan on lessons learned for future investments, justice will not be brought to the complainants. The question of the impact of this investment and this divestment is especially important since the IFC was the one championing the topic of ‘Impact Investment’, and spearheaded the development of the ‘Operating Principles for Impact Management’ that the IFC launched in 2019, just a few months before its divestment from Titan. Interestingly enough, one of those nine principles, namely principle number 7, calls on investors to consider the effect of exits on sustained impact when they decide to divest.

To add salt to the injury, the IFC’s quiet divestment sets the Titan company off the hook regarding its numerous violations, not only of national legislations, but also of IFC standards that the company had committed to conducting accordingly when it signed the investment agreement with the IFC in 2009. The World Bank Group, including the IFC, has a Sanctions System that includes suspension and debarment of individuals and companies that have committed sanctionable misconduct. Debarred entities are ineligible to do business with the World Bank Group for a specific period of time, and notice of such debarment is posted online. However, sanctionable misconducts are all related to mishandling of money. The World Bank Group does not consider the violation of its own environmental and social standards and safeguards a misconduct worthy enough to be sanctionable. The goal of those standards and safeguards is to protect people and the environment from the negative impacts of any investment and ensure that it achieves positive development impacts. The fact that the violation of those policies is not included in the list of sanctionable misconducts sends a message that the World Bank Group cares more about its invested money than the lives of the people that it claims are at the center of its mission, making it just like any other bank.