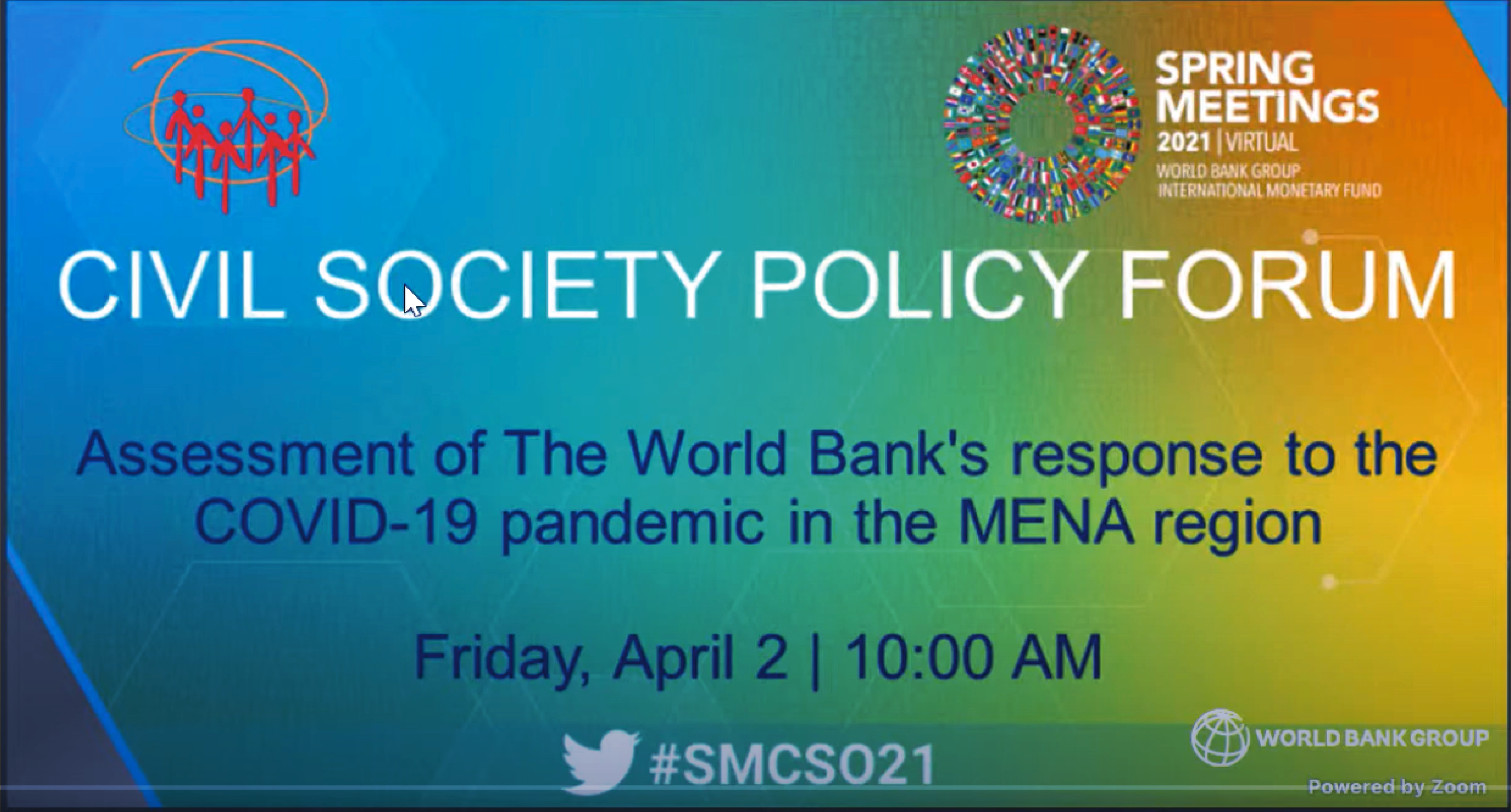 On Friday, the 2d of April, Arab Watch Coalition members held an insightful dialogue flagging specific issues from the ground with regards to the World Bank response to COVID19 in the MENA region, bringing them to the table with the World Bank representatives during the Civil Society Policy forum among the Spring meetings 2021 held by the World Bank Group and the International Monetary Fund.

Amy Ekdawi, the Arab Watch Coalition Co-Director, ensured the moderation of the dialogue which brought together the coalition representatives from the region: Mr. Yahya Saleh, the Yemeni Observatory for Human Rights from Yemen, Ms. Fatma Fahmy, Shamseya for innovative community healthcare solutions from Egypt, Mr. Mohammed Loutfy, The Lebanese Union for People with Physical Disabilities from Lebanon, Mr. Ahmad Awad, Phenix Center for Economic and Informatics Studies from Jordan, and Mr. Abdelilah Tazi, Talassemtane association for environment and development from Morocco along with representatives from the World Bank: Mr. Maninder S. Gill, the Global Director for Environmental and Social Framework and Ms. Keiko Miwa, the Regional Director for Human Development for the MENA Region. The session was attended by Mr. Charles Di Leva, the Chief Officer for Environmental and Social Standards at World Bank, and more than 72 different organizations around the world.

From October to December 2020, each organization member has conducted an assessment study, analyzing specific projects in response to COVID19 in their countries and during this session, they outlined important findings of each of the 5 case studies. They specifically covered the gaps in inclusive citizen engagement, access to information and grievance process effectiveness in these projects as part of the World Bank’s Environmental and Social Framework, and shared their recommendations to enhance the World Bank’s interventions, especially during the time of crisis. The WB representatives have highly welcomed and valued the studies outcomes which brought them closer to the reality in place, Mr. Maninder Gill described it as a ‘quadripartite way of working’ rounding up the efforts of the governments and official agencies, the international development partners, and civil society which has a key role to play in ensuring the just development process and the beneficiaries who are at the center of this dynamic.

The World Bank representatives acknowledged the lack in engaging and reaching out to relevant stakeholders, particularly during the COVID19 which has been seemingly a major pretext for not conducting real consultations with them, especially that remote technology impose itself in these circumstances. Which also draw a factual lesson on enabling stakeholder engagement processes, even in such difficult context, knowing that the World Bank plays a key role in the real development process globally, including countries of the MENA region.

As a result of this fruitful exchange, the World Bank representatives testified great commitment to support governments and agencies in their ways of operation to achieve more effective stakeholder engagement and inclusion, which is also an ongoing process throughout the projects’ implementation, not only in documents (i.e. the Stakeholder Engagement Plan) as well as ensuring a greater responsiveness of the Grievance Redress Mechanisms (GRMs) of each project. They also expressed their commitment to information sharing, either through their portal or through the governments’ and partner agencies’ websites. They welcomed the speakers’ recommendations on how information can be made available and much more accessible to everyone who needs it. In response to Egypt project on information disclosure, regarding the Stakeholder Engagement Plan, Ms. Keiko Miwa mentioned that the delay noticed in this project to be effective stems from the World Bank commitment to the ESF agenda and that the process required that the government discloses the information state in place and that this process has taken place last month.

This kind of dialogues and more is a channel that bring closely civil society’s specific and mutual concerns to the World Bank’s representatives; especially when it highlights arguments and facts from the ground; which was the case of the 5 studies of different contexts in the MENA region. Which shaped the overall follow up scheme for these COVID19 response projects, to make their impact as meaningful as possible on the ground at the implementation stages and for the relevant right-holders which translates the Coalition main objective which is towards more inclusive, participatory and just development.

If you didn’t succeed to attend the session dialogue, you can watch in English :